Chad-Michael Gilbuena partied his way through four community colleges before joining the U.S. Army in 2009. He enlisted to get a focus in life and prove himself worthy for the woman he loved.

What followed were four years as a mechanic attached to an infantry unit — including deployment to Afghanistan. He then served three years as a paratrooper with the famed 82nd Airborne Division.

In 2016, Gilbuena transitioned to the Army National Guard in Fresno and started to explore getting a college degree. He originally believed he’d have to return to community college and improve his grade point average before attending a university. Then he connected with the Veterans Education Program at Fresno State. 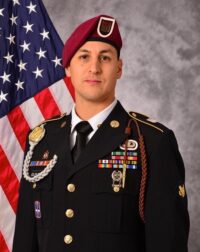 “It was surreal,” Gilbuena said. “They said, ‘You’re automatically in the program. Here are your books. This is your classroom. All the instructors will come to you.’ It was totally unexpected and very much appreciated. Having the opportunity to get into Fresno State — it was always a dream of mine.”

Like all students, Gilbuena brought individual needs to the classroom. He has attention deficit hyperactivity disorder, which made concentrated reading difficult in high school and community college. “But the instructors in the veterans program helped me to cope by figuring out my best learning method.”

The program also helped Gilbuena transition from his communication style with soldiers — forceful and intense — to more low-key interaction with younger students at Fresno State. “They taught us how we needed to act and how to be successful in the college environment,” he said.

Gilbuena became more efficient as he juggled many responsibilities. While in the program, he worked full time for the Army National Guard and managed a busy home life. Gilbuena and his wife, Miranda (he joined the Army for her) have twins, Luke and Leia. “Our ‘Star Wars’ babies,” Gilbuena jokes. “Trying to carve out time to do everything was tricky, but I was able to by organizing and prioritizing properly.”

The juggling act continued after Gilbuena finished the Veterans Education Program and pursued a bachelor of science degree in recreation administration with an emphasis in adventure/tourism. One weekend a month for 18 months, he went to Officer Candidate School, which led to his commissioning as a second lieutenant in August of 2021. “Oh yeah, I was busy,” Gilbuena said, smiling.

After graduating this past May, his next step is a full-time position with the U.S. Forest Service, where he interned in the spring 2022 semester. Gilbuean remains active in the Army National Guard. And, no matter where his career takes him, he will draw from the speech class in the Veterans Education Program. “It was pretty profound for me. It helped me become a better communicator and more of a leader.”

Gilbuena communicates clearly when asked if he would have accomplished so much without the Veterans Education Program. “Oh, absolutely not. I’d still be trying to get into the university.”

(Written by Doug Hoagland, a freelance writer based in Fresno. This story was first published in ACCESS Magazine, a publication of the Division of Continuing and Global Education.)