Fresno State’s undefeated club rugby team will play for a national championship — just 13 years after the team was formed.

The club, created in 2009, is competing for American College Rugby’s DI-AA national championship against the University of Kansas at 4 p.m. Saturday, April 30, at Choctaw Stadium in Arlington, Texas. The match will be streamed live online.

“Being able to lead the team as we make history for Fresno State feels like nothing I’ve felt before,” said team captain C.J. Banuelos. “Just thinking about winning that trophy makes me tear up a little, and I know it gets the rest of the boys fired up. We’ve got such a great group of guys…and everyone is working hard so that we can achieve our long-term goal.”

Unlike NCAA-sponsored varsity scholarship sports at the University, such as football and softball, rugby is a club sport and none of the athletes receive athletic scholarship aid.

To travel for competition, the team relies heavily on donations, and is seeking continue community support in pursuit of its first club national championship, said coach Patrick Quan. 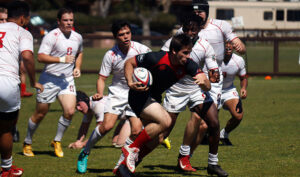 Seth Olvera, a senior who’s played on the team for three years, said making it to the championship game is “not surprising.

“It’s been a build up over the past three years,” Olvera said. “It’s work well done and earned thanks to the amount of skill, talent and commitment we have.”

Overall, Fresno State is 9-0 (including a win by forfeit) and has averaged more than 60 points per game. The club beat Sacramento State 36-0 to earn its first Pacific West Conference championship.

“All through preseason, league and playoffs, we haven’t lost a game,” Banuelos said. “With only one game left, we can have a completely undefeated season and move from being ranked third in our division to the No. 1 spot.”