Valerie Bauxham, of Fresno, left her career in the health field to pursue a physics degree at Fresno State. As a wife and mother of four, she knew her college journey had to be intentional — she did not want to waste any time. 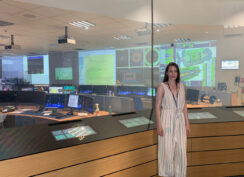 Fresno State physics student Valerie Bauxham working in the control room of the ATLAS experiment at CERN in Geneva, Switzerland.

“My time is extremely valuable to me. My husband is a pediatrician and we ran a rural pediatric clinic together from 2008 to 2011, then I transitioned to neurofeedback therapy for kids from 2011 to 2016,” Bauxham said. “I remain involved with our current project, a residential treatment center for kids and teens in crisis. However, my deep inclination for physics led me to Fresno State. I selected Fresno State because there is no other CSU campus that offers particle physics as an option. The program offers students an opportunity to intern at ATLAS Experiment at CERN in Geneva, Switzerland.”

On July 5, Bauxham was in the ATLAS (A Toroidal LHC Apparatus) experiment control room in Geneva, assisting with the live press coverage of the official start of data – taking at a record energy of 13.6 TeV.

In 2007, Fresno State became the first CSU to join ATLAS for CERN (an acronym for the European Organization for Nuclear Research).

In 2013, the Royal Swedish Academy of Sciences awarded the Nobel Prize in physics to theorists Peter Higgs and Francois Englert for their work developing the theory known as the Higgs field, which gives elementary particles mass. U.S. scientists, including those working in the ATLAS Program at Fresno State, played a role in advancing the theory and discovering the particle that proves the existence of the Higgs boson (or “God particle”).

In the 1960s, Higgs and Englert, along with other physicists, published research introducing the theory of the Higgs field. On July 4, 2012, scientists on the international ATLAS and CMS experiments, confirmed this theory when they announced the discovery of the Higgs boson.

The Physics Department at Fresno State created an “Introduction to Particle Physics” (PHYS 163) and “ATLAS Experiment at the LHC of CERN” (PHYS 164) courses led by Professor Yongsheng Gao, who has been involved with the project for more than a decade. The online courses are now open to all students from CSU campuses.

“These courses also act as a filter to determine which students will have priority in going,” said Dr. Douglas Singleton, chair of the Physics Department at Fresno State. “Both of these online courses are offered to students from around the CSU.”

Since 2008, 20 other CSU campuses have joined the program. With Gao’s leadership, over 100 students from the CSU have interned for eight to 10 weeks at the LHC (Large Hadron Collider) on the ATLAS detector at CERN. Students are selected based on their application and performance in the online course.

Students who travel to Switzerland receive a $5,500 stipend that comes from a three-year, $249,863 grant from NSF’s International Research Experience for Students . If the students select to do their eight weeks virtually, they each receive $4,000.

“The CSU students who had worked at CERN have moved on to teaching, high-tech companies and Ph.D programs at many top research universities,” Gao said. “The ATLAS/CERN research experience prepares CSU students for their personal and professional success in an increasingly competitive, global and multicultural society.”

Bauxham credits her success to her family’s support and the mentorship she received from Gao.

“Dr. Gao, in particular, has helped me realize that no matter how old I am, I can still pursue a degree and career in the field I love so much.”

Bauxham plans to pursue a master’s degree in science communication.