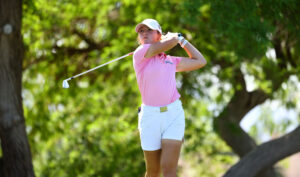 London native Harriet Lynch was just 4 years old when her father took her to the driving range and let her hit her first bucket of golf balls. Since then, there have been very few days when Lynch hasn’t had a golf club in her hand.

“My dad and I share a love of the game,” said Lynch, now 21 and in her senior year as a business major at Fresno State. She was the only Bulldog to compete in all 10 tournaments this season, averaging a score of 75 through 30 rounds while leading the team in par-3 scoring average. After she graduates in May 2023, she’ll turn pro with the European Ladies Access Tour before heading to Qualifying School in August.

One day, she hopes to join her idol, English professional golfer Georgia Hall, on the LPGA Tour. “The big dream is the LPGA,” Lynch said.

Lynch would be the first to tell you she comes from a modest upbringing where “big dreams” tend to be elusive. “We weren’t struggling,” she said, “but my parents worked long, hard hours to give me and my brother everything we needed.” Lynch’s mother works as a personal assistant at a London bank. Her father, a retired detective, still drives a black cab part-time in the city. There were days, Lynch said, when he’d work 21 hours straight, sometimes sleeping at his office when there was a case he was investigating. Her parents are her greatest source of admiration, Lynch said, but there was only one way she would be able to chase her golf dreams in earnest.

“If I wanted to play collegiate golf,” she said, “I knew I had to get a full-ride scholarship somewhere.”

That somewhere turned out to be Fresno State, and the full-ride scholarship came from Herb and Melinda Depp, benefactors who recently eclipsed $1 million in philanthropic giving to the university.

“Without them,” Lynch said, “I wouldn’t have been able to come.”

Giving to Fresno State “probably started 30 or so years ago,” according to Herb Depp, who said it was a cold call from then-Fresno State President John Welty that got him started in philanthropy.

Both Herb (a Vietnam veteran and retired pilot) and Melinda (a retired schoolteacher) gave a $150,000 scholarship endowment to support students in the College of Science and Mathematics and the Kremen School of Education and Human Development (specifically in the area of teacher preparation).

“We still get letters from the recipients,” said Herb, a 2006 Top Dog Distinguished Alumni award winner from the College of Science and Mathematics.

The couple, now full-time Montana residents, first met on the Friday before classes started at Fresno State in the fall of 1962. Back then, tuition was $50 a semester, “whether you took one unit or 20 units,” Herb said. “I never knew anybody who had a student loan.”

“That’s because there were no student loans,” Melinda said.

After successful careers in aerospace and teaching, the Depps settled in Montana in 2010, where they met and befriended then University of Montana women’s golf coach Emily Loftin (née Milberger), whom the couple admired. She was hired to coach the Bulldogs women’s golf team in 2013 by then-Fresno State Athletic Director Thomas Boeh.

“Emily did a great job recruiting golfers from different countries,” Herb Depp said, “so I started providing her with $25,000 scholarships.”

The Depps’ legacy of giving to Fresno State athletics continues today. They have given to the Bulldog Foundation for over 30 years, and have provided full scholarships to Fresno State student athletes since 2016.

“Fresno State means everything to me,” said Herb Depp. “I met my wife of 55 years there. I had a glorious four years there.”

The financial gifts, he said, bring the couple great joy, and they love to hear how lives have been impacted as a result.

“You really can change lives and make a difference,” Melinda said.

Herb hopes that one day, those who have been impacted by their gifts will pay it forward if they have the means to do so.

Whether Harriet Lynch reaches the LPGA tour or not, her life is one of many that have been forever changed by the Depps’ generosity.

“I wouldn’t have been able to develop my game like it has without the coaches and facilities we have here,” Lynch said. “I am beyond grateful to have received the scholarship from [the Depps]. It has created so many opportunities for me, and I am eternally grateful for them.”