The battalion also will honor an alumnus, Colonel Roger P. Hedgepeth, commander of the 3rd Military Police Group in Savannah, GA , for his nomination by Fresno State to the National Army ROTC Hall of Fame and a cadet recruit will be announced as the recipient of a $100,000 Army ROTC National Scholarship.

For the Raider Challenge, JRTOC programs from nine Valley high schools will participate in ten events that include a road march, situational awareness and critical thinking tests, a grenade assault course, a physical fitness challenge and drill and ceremony.

At 9 a.m., the competition will kick off with the 3-mile ruck march on campus beginning at the Grosse Industrial Technology building (Barstow and Jackson Drive). At 10:30 a.m., the teams will move to Bulldog Stadium to begin the synchronized events. Drill and ceremony exercises occur throughout the day.

The event concludes at 3 p.m. with an awards ceremony at the stadium presided over by Dr. Lynnette Zelezny, Fresno State provost and vice president of Academic Affairs, and Maj. Boyce

Buckner, chair of the Department of Military Science and Leadership in the Craig School of Business.

The ROTC program will present a gift of $2,700 raised during the “Veterans Day 5K Run” in November to the Clovis Veterans Memorial District and Veterans of Foreign Wars (VFW) Post 3225.

Also during the awards ceremony, Colonel Hedgepeth, who was commissioned second lieutenant in the U.S. Army Military Police Corps in 1991 at Fresno State, will be recognized as the Fresno State 2016 nomination for the National Army ROTC Hall of Fame. He was nominated for the honor by University President Joseph I. Castro and Maj. Buckner. 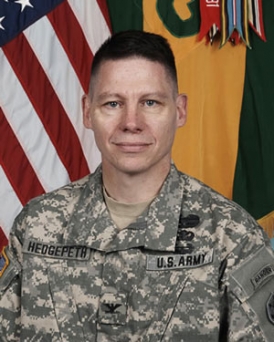 Colonel Hedgepeth earned a bachelor’s and master’s degree in criminology here before earning a master’s in international relations from the JFK Special Warfare Center, and a master’s in strategic studies from the U.S. Army War College.

“Saturday’s celebration of the 100-year anniversary through Raider Challenge 2016 demonstrates across U.S. Army Cadet Command how our ROTC Program, University, community and JROTC Programs partner together and how we in the Central Valley of California lead the way,” Buckner said.

On June 3, 1916, the United States Army Reserve Officer Training Corps (ROTC) formed to establish officer commissioning programs in accredited universities across the country. In 1982, the California State University, Fresno, Army ROTC Program was established and has educated, trained and commissioned hundreds of line and nurse officers for the active, National Guard and Reserve units. Cadets and graduates also provide service to the community through various programs and events such as the 5K run and volunteering.

The program is housed under the Department of Military Science and Leadership in the Craig School of Business.

The University, which also hosts the Air Force ROTC established on campus in 1948, has been named a Military Friendly School by G.I. Jobs magazine.

For more information, contact Nancy Kobata at 559.278.1664 or nancyko@csufresno.edu.